Ion Setting On A Fan Meaning – (How Do Ion Fans Work) 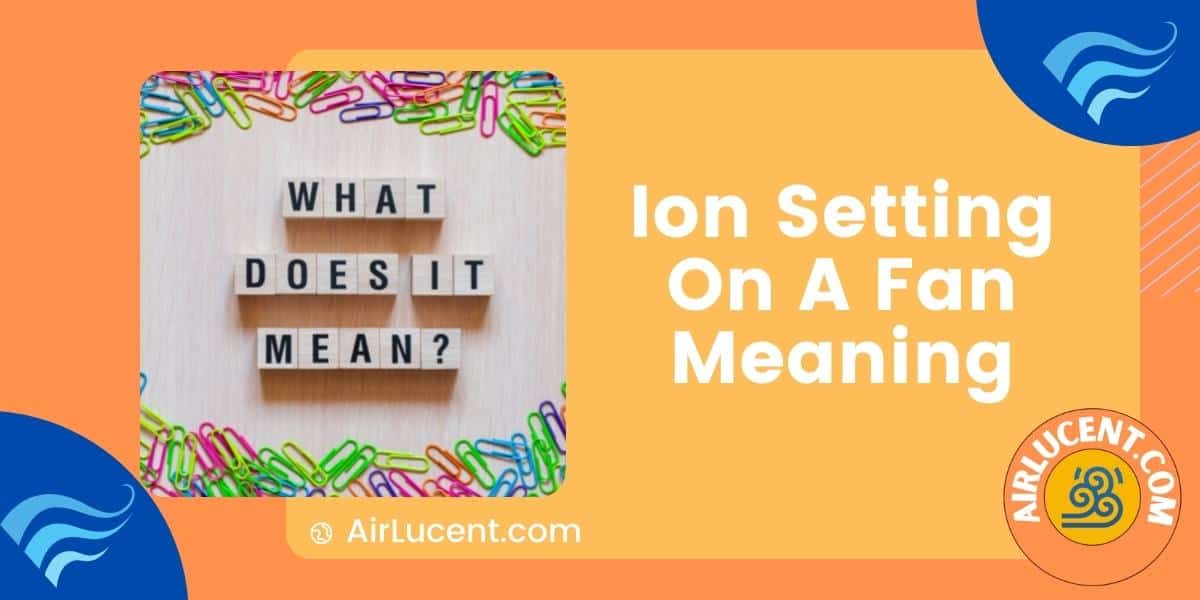 Does your fan have an ion setting button and want to know what this button does when activated?

The ion setting on an ionizing fan activates the ionizer to purify the air around you. The ionizer purifies the air from dust and other unwanted particles by emitting negatively charged ions into the air, which attract the surrounding air particles. When these two attach to each other, they become attractive to surfaces and cling to them, leaving your air clean.

How do ion fans work?

The fan then blows these negatively charged ions into the air.

Some of the particles that get charged and are extracted from the air by that action include the following:

Thus, the air in your room will become much cleaner, while the walls, cabinet surfaces, and ceiling will become dirtier.

Ionizing fans come with some benefits to the owner that includes the following.

Improved quality air: Because pollen, allergens, dust, and tiny fibers are removed from the air, you remain with only improved quality of air to breathe. Cleaner air can also be beneficial to people with asthma.

Less Airborne respiratory viruses/bacteria. The principle on which the ionizing fans work decreases overall exposure to respiratory bacteria such as flue, cold or asthmatic triggers.

It creates positive vibes and boosts your mood. According to a study at Columbia University, negative ion generators were found to bring relief to people with chronic depression as much as antidepressants.

What Does the Ion Button Mean on a Lasko Fan?

On a Lasko fan, the ion button activates the built-in ionizer. Compare rubbing your balloon against your hair, then placing it against the wall and letting it go. Of course, it will remain ‘stuck’ on the wall.

That is because it receives a negative charge by rubbing it against your hair, making it cling onto surfaces. So, when the ionizer is turned on, it sends a pool of negative ions that attach to the surrounding air particles.  This attracts the air particles to surrounding surfaces, leaving the air in your room free of pollen, allergens, and other unwanted particles. That consequently makes your air cleaner.

Yes, they do. Ion fans are a great way to clean the air in your home, especially if you suffer from allergies or asthma. The ion generators used in these devices create negative and positive ions that help reduce pollutants and allergens in the air.

But how do they achieve that? When ions charge surrounding particles, an odorless gas known as ozone is formed. Without getting into a science class, this gas makes the viruses inactivate by destroying their genetic membrane.

Are ionizing fans bad for you?

The short answer is no, but there are some things to consider before you buy a new ion fan. Ionizers have the potential to emit ozone. And while ozone works well at eliminating microorganisms like viruses, it’s also a lung irritant in rare cases, which may cause short-term effects such as throat irritation, chest pain, and coughing.

However, to get the most out of your ionizer fan, you should adjust it to your personal comfort level. As with any machine/appliance, ensure it is balanced and working correctly before using it continuously.

We have seen in this guide that ionizers work by shooting negative ions into the air and sticking together with the surrounding air particles, which eventually fall down on the surfaces, leaving the air in your room/ home to some extent clean.

In other words, ionizers work by making unwanted particles stick to surfaces rather than removing the particles from the air.