How To Install a Ceiling Fan That Has A Red Wire? 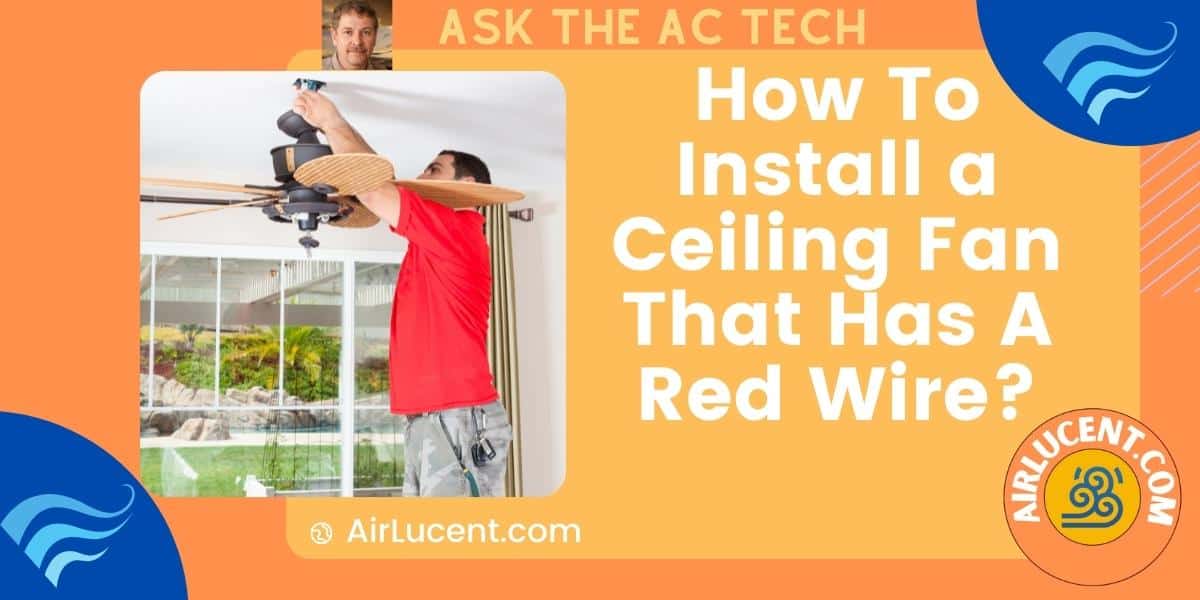 Sometimes, you may have a  red wire on your ceiling fan and you may be wondering whether or not you should ignore it or otherwise have it connected too. And wiring a ceiling fan that has a red wire can mean a bit more of a careful wiring job.

The good news is that installing a ceiling fan with a red wire is not very difficult at all; it just takes some extra time and effort to set up everything correctly.

Before you start installing your ceiling it’s important to understand what each color of the wires means to correctly set things up. The commonest wire colors used for the ceiling fan wiring include black, blue, white, green, and bare copper wire(ground wire).

As a disclaimer: All info provided is for education only. Please see our Terms Of Service.

The black wire is the live wire that carries current to and from the electrical box. It’s sometimes known as the ‘hot’ wire.

The white wire: This is the neutral wire. Its primary function is to complete the electrical circuit. This wire does not touch the switch box, it goes straight to the electrical box.

Bare Copper or green wire: This is also known as the ground wire or earth wire. It keeps your fan from experiencing power surges or lightning.

Red wire: This is a ‘second’ live wire that is sometimes included in your ceiling fan unit. Sometimes it can come from the wiring of your ceiling. This live wire carries current to the light kit. Other times you might see a blue wire instead of red, they basically do the same job.

1.       If you are replacing your old fan with a new one, start by removing bulbs and globes from the old fan.

3.     Check for crews on the fan canopy and unscrew the canopy to take it out.

5.       In many cases you should see 3 wires from the ceiling, a white, black, and green/bare copper wire

6.       But if you have four wires from the ceiling (which includes a blue or red wire) don’t worry! That means you might have separate switches, one for the fan and another for the light kit. That’s what we shall be looking at in detail shortly

7.       Check the manual and prepare the tools provided in your fan’s package.

8.       To start installing your new fan, begin by attaching the brackets onto the ceiling and let the fan hang from the J-hook as you do the wiring.

At this stage, you should now start wiring your ceiling fan. So how should you correctly wire a ceiling fan that has a  red wire?

How to wire a ceiling fan with a red wire

1.   Wiring ceiling fan without a switch

But even if yours doesn’t come with a remote control, you can still be able to control your fan using the pull chains.

This is how to wire a ceiling fan without a switch

If you have a light kit and a fan and you want to control them separately, you can achieve this by wiring them in the following order.

In the switch box

After you are done wiring from above (ceiling), head over to the switch boxes to complete this job.

The remote-control system will typically have 5 wires and you are going to wire them according to how they are marked. It will have a red wire (fan going out), two black wires(one marked as light going out) and another marked as ‘live going in’, two neutral wires(whites)

Start wiring by connecting the wires from the remote-control system in the following easy steps:

That’s it, you are done wiring a remote-controlled ceiling fan with a switch on the wall.

Should You Ignore the Red Wire?

It depends on whether you have a light kit or not. If you don’t have a light kit (which is sometimes sold separately) then you can probably ignore the red wire but always ensure it’s kept capped to avoid causing any electrical problems if it touches any surfaces.

However, if you need the light kit then you should not ignore the red wire but wire it accordingly.

What is the Red Wire for if it’s not on new fan instructions?

That said, most manufacturers assume that if they provide you with the remote control then there is no need to use a wall switch to control the ceiling fan. That is why you may not find anything about the red wire on the user manuals for ceiling fans with remote controls.

Does the Red Wire Cause/Reduce Buzzing When Turned On?

No, the red wire has nothing to do with the noise that may come from your ceiling fan. That is, it doesn’t cause or reduce any buzzing or humming noises..

However, your ceiling could produce undesired strange noise if it’s not properly wired. For example, if you connect your fan to the dimmer switch, not only will it produce strange noises, but it can also damage the unit if left unchecked.

Does The Red Wire have anything to do with not being able to turn on a light?

Yes, the red wire carries the current to power up the lights on the fan. If this wire is not wired or connected properly, this can prevent lights from turning on

Can You Connect the Red Wire to the Blue Wire?

Is the Red Wire a Live Wire?

If your new fan only has 3 wires while the Celine box has four, chances are your fan uses a remote control or has no light kit.

This is what you have to do:

Hopefully, I answered all there is about the red wire in a ceiling fan installation. If you run across something when installing your fan that you are not sure about, please ask your question in the comments below.