14 SEER vs 16 SEER – Differences Explained by an AC Tech 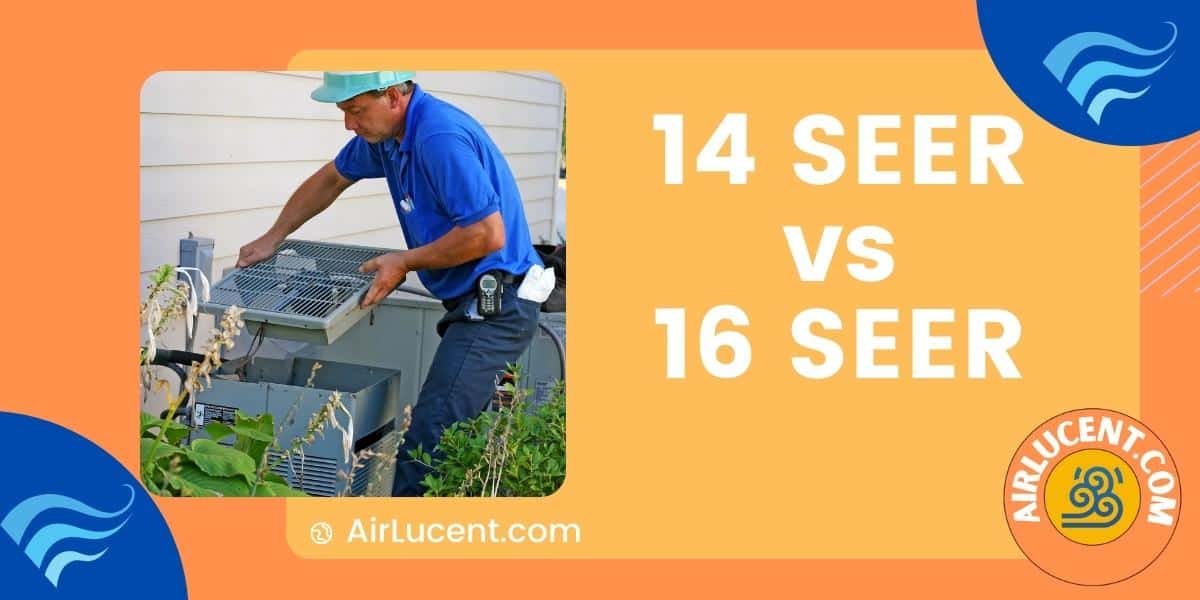 But what is SEER? Seer is simply the ratio between the cooling output of an air conditioner and the energy it uses. It stands for seasonal energy efficiency ratio.

The main difference between a 14 SEER and a 16 SEER is that the latter is a 2-stage compressor air conditioner. Unlike a single-stage 14 seer, a 16 seer has two distinct compressor speeds that allow it to cool your home or office more efficiently and evenly.

These two types of air conditioners have a few differences, as summarized in the table below, which can help you make an informed decision when picking a better one for your needs.

This is one of the most distinctive features between a 14 SEER and a 16 SEER. A 14-seer air conditioner is equipped with a single-stage compressor, while a 16 see compressor often has a 2-stage compressor.

In a single-stage compressor air conditioner, the air is compressed by a single piston in the first cylinder, let’s say about 120 Psi. Then it’s transferred to the storage chamber.

However, in a 2-stage compressor ac, an extra step is involved. After the air is compressed in the first cylinder, it’s transferred to another smaller cylinder where its compressor further (lets at 175 psi) before being transferred to the storage chamber.

Although a 16 seer can save on energy costs in the long run, they are generally more expensive than the 14 seer. 14 SEER air conditioners cost $500 to 1000 less than 16 SEER typically.

What is your favorite SEER 14 unit and why?

It depends on what your home needs, but I like the brand Goodman. They’re readily available at local suppliers, they have a great warranty, they’re American-made, they’re fairly quiet, and they’re reliable. Additionally, they’ve been around for a long time which gives me confidence in their products. The main point, however, is they’re very economically priced. If you’re looking for a machine that will do the job but won’t break the bank, Goodman is a solid brand. – Jake Romano from John The Plumber

While 14 SEER and 16 SEER are almost the same, 2nd stage compressor air conditioners are more efficient regarding low-level partial cooling. Single-stage always run-on full blast regardless of how hot or cool it is. This makes them less efficient.

That said, 2-stage systems spend 80% of their time running on the lower setting, which uses about 60-70 percent less energy, thereby saving costs overall.

With that in mind, should you choose to go for a 16-seer model, you should expect to save about 13 percent on energy costs each season compared to what you can spend on running the 14 SEER on electricity yearly.

There are a few factors to consider before calculating how much you can save yearly.

But all other factors being equal, it’s best to do some math calculations to estimate the yearly running costs between the two SEERS.

1.       Let’s start by calculating the average yearly energy costs of 14-SEER and 16-SEER. In this example, we are assuming that

To get the annual energy cost, we’ll use this formula

4.       Lastly, we need to find the cost by multiplying the answer by the electricity rate. Let’s take for instance, if we are in phoenix, the average cost of electricity is $0.12.

As a reminder, this is just an estimate, every variable will depend on what you have and the numbers of hours you run your AC per year

While 16 SEER (2-stage system) typically have a longer lifespan than the 14-SEER, they can be more expensive to repair compared to the 14-SEER.  The good part about them is that they don’t need to be replaced frequently as the single-stage system 14-SEER.

Although both systems run at 100% (the loudest running mode), the 16-SEER is quieter when running on the partial capacity cooling mode, a feature that is not there in the 14 SEER models.

This makes the 16-SEER the best choice if you want something quieter. The cheaper the air conditioner is in air conditioning, the louder it is. That also explains why a 16 SEER comes at an extra cost.

If you are looking for comfortable cooling and dehumidifying, 16 Seer AC is the way to go! A16 SEER provides better comfort than a 14 seer, and here is how:

·         A second-stage compressor on the 16 SEER enables it to run on the lower / partial capacity mode. Meaning that it can run on the lower setting for a long time, providing better and ‘even’ cooling compared to a 14 SEER that runs on one high speed.

The 14 SEER (single-speed system) can cause uneven or hot spots within the cooling environment, and this can really be uncomfortable.

·         Improved humidity control: Because a 16 SEER can run for a long time on the low compressor speed, they tend to humidify the air better, especially in regions with high humidity levels.

This provides better comfort because high humidity levels can make your home feel even hotter than it actually is. Better dehumidifying helps remove moisture from your home, which eventually prevents the buildup of mold and other types of pollution that can potentially lead to health issues.

7. Effect on the environment

Generally, higher seer means more environment friendly. A 16 SEER is more environmentally friendly than anything below that rating. This means that it doesn’t emit as much greenhouse gasses as the 14 SEER, making it a better option if you are very particular about keeping our mother planet safe.

How to make your air conditioner more efficient

·         Replace air filters on time. These days most air conditioners come with auto-reminders to tell you when the air filter is due for cleaning or replacement. If yours doesn’t, then ensure to replace your air filter every 2-3 of months.

·         Keep debris away from the outdoor unit. Dirt and leaves can find their way to your condenser unit and block the fins, which could prevent heat disposal from the ac. You can use the leaf blower or horse to clear away the dirt.

·         Remember to hire a professional when your cooling system needs to be repaired. In addition, clean the evaporator coil at least once a year and keep your AC’s drain channels clean to prevent clogs.

Is 16 SEER worth the extra money?

Whether SEER 16 is worth the extra money or not depends on a few factors, including:

A 14 seer can be ideal in these scenarios: