13 SEER vs 14 SEER – Differences Explained By an AC Tech 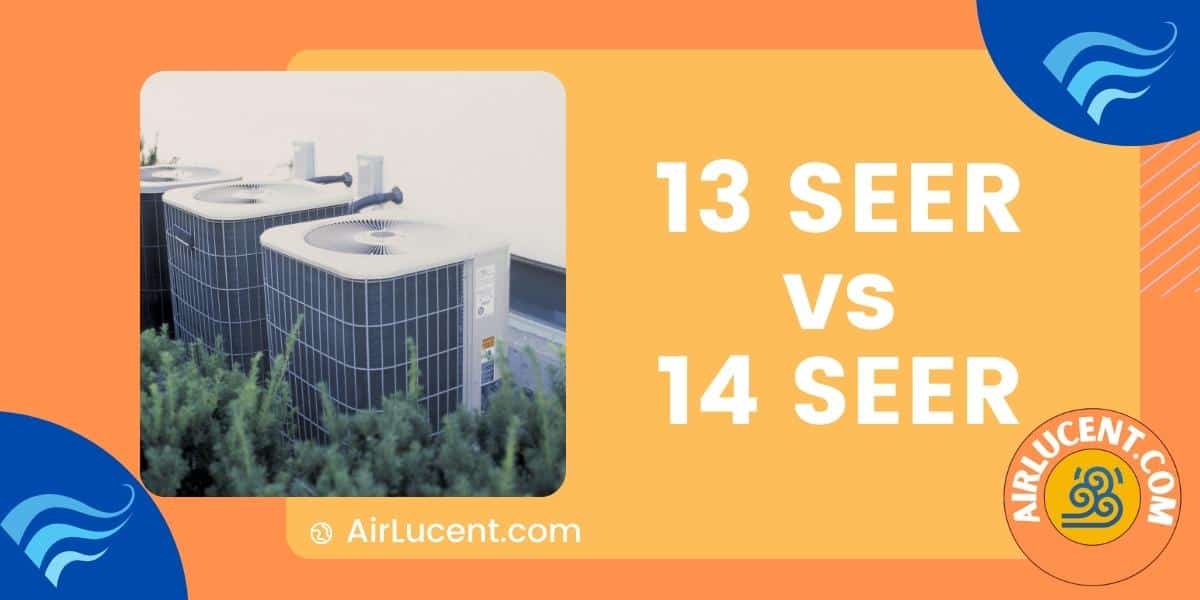 What does it mean for an air conditioner to have a single-stage compressor?

Because of that, they run at the top speed 100% of the time they are running, and that is why they are not so efficient compared to higher seer ACs. But don’t worry, a 13 or 14 seer air conditioner should be able to cool your home properly and with the right sizing.

A 14 seer Is definitely better than 13 seer when it comes to efficiency. When you choose a 14 seer, it should save you on energy bills year on year.  So how much should you expect to save on energy costs?

It’s often best to do a few math calculations to know exactly how much it will cost you to run an air conditioner per year. From that, we can then compare the costs of running each of the two air conditioners per year and then find the difference. That should give a clear figure of how much we should expect to save. All other factors being equal and as I mentioned earlier, a 14 seer over a 13 seer is 7.2% more energy efficient.

According to the United States Department of energy, 13 seer air conditioners will be phased out by 2023.  That is, the minimum standard will be 14 SEER in the north and 15 SEER in any other region of the country.

And while it will not be immediately mandatory to replace your 13 SEER with a seer 14 SEER or higher by 2023, getting 14 SEER should probably be worth considering.

4.  Price And Cost of installation

A 13 SEER can be about a few hundred dollars less expensive than a 14 SEER. If you are on a budget, you may consider getting the 13 SEER instead. Even though there is a slight difference in the price, the performance of each of the two ACs is nearly the same.

Also, the annual energy saving costs should be just about 7% which is not so much in the short term.

5.  Effect on the environment

Is 14-SEER worth the extra money?

Between a 13 SEER and a 14 SEER AC, there isn’t really a big difference in terms of comfort. Both types don’t really humidify your home better than 2 stage compressor ACs. Meaning, that if you are looking for more comfort alone, a 14 SEER air conditioner is not really worth the extra money.

But is it efficient if you are going for efficiency? It’s still not worth the extra money. Take, for example, you are using a 13 SEER air conditioner and costing you $600 yearly to run, a 14 Should cost you 7% less, that’s just about $42 less. So yes, you are paying less annually on energy but the price difference up front needs to be considered (at least until 13 is phased out).

What are the minimum SEER standards in the USA?

How to improve your air conditioner’s efficiency

It must be noted that when manufacturers advertise the SEER ratings, that could actually be for only one size with a particular air handler and coil. Usually, other factors have to be taken into account that many advertisers don’t tell the consumers about such as the installation and the sizing.

If the air conditioner is undersized or oversized, it will be less efficient. In addition, installation guidelines have to be properly followed such as the allowance from the wall to allow free flow of air, otherwise, the air conditioner’s efficiency would be lowered.

With that in mind, the rated SEER is under certain conditions that are generally not achievable under normal working conditions. However, a good installation and proper sizing could get you close to the rated seer for a particular AC.

Below are a few things to consider in making your air conditioner even more energy efficient.

How do I check the SEER rating for my central air conditioner?

If you are not sure about the seer rating for your current air conditioner, you can check this on the outdoor unit and look out for the yellow large sticker. If you can’t clearly see the information on the sticker for any reason, you can go to the indoor air handler unit which equally has a label on it.

But if SEER information isn’t available either, get the model number and look up the details about your air conditioner on your manufacturer’s website.

I hope I explained the differences between SEER 13 and SEER 14 so now you have a better understanding of the differences between the two. But it best not to get too hung up as SEER 13 will be phased out shortly. Also, my buddies at Griffin Air are trying to educate you on why you shouldn’t get hung up on SEER in general as the same SEER is not created equal across different brands.