Is 600 Microns a Good Vacuum? – Learn the Ultimate Answer 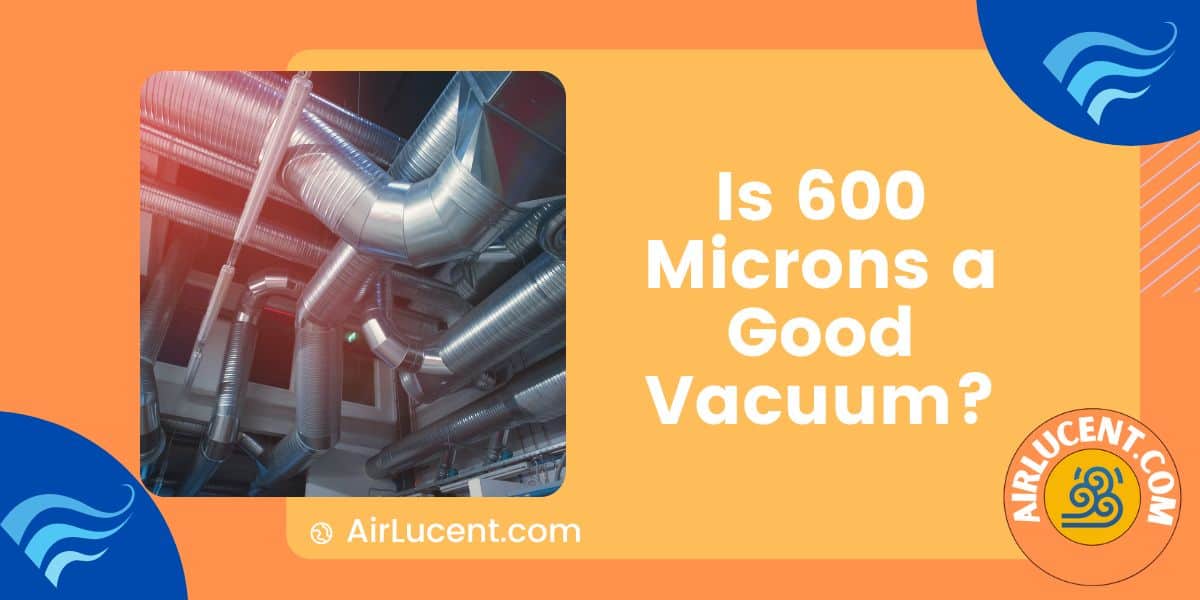 We all lose our heads over the micron level while setting up our HVAC systems. Is 500 good? Is 1000 good? These questions swarm the internet every day.

Well, worry not, I shall be the one to answer it.

600 microns is not too good of a vacuum. It means that there is still harmful water vapor in the HVAC system. A good vacuum is 500 microns and below. To be more specific, a decay holding of 500 microns or below. However, there are ways to achieve a lower number of microns.

Why is 600 Microns Not a Good Vacuum?

600 Microns is considered a not bad vacuum if and only if you’re considering moisture. Factors like decay holding or the vacuum pump are not considered in this case.

You should consider lowering it more to prevent future risks to your system. I mentioned some of the risks below-

That bears the risk for both your health and your HVAC system. You may face many respiratory diseases due to this.

Reason 2: Condensation in The System

A higher micron count may point to condensation in the system. It marks the presence of water vapor in sensitive areas of the system.

Condensation may not seem like that big of a deal at first. However, it wreaks havoc on your HVAC system. Your system is at risk of failure if that is the case.

A higher micron count also means that there may be a system leak. System leak leads to contamination. Your system may fail soon if left in that condition.

Now you may not face a system leak just yet. But using a 600-micron vacuum continuously may result in the system leaking. System leak is probably one of the worst things to happen to your HVAC system. The cost of fixing this mess is significantly higher.

These are some of the risks of a higher micron count. Now I’ll move on to the chart to make it easier for you.

The micron in a system follows a simple principle. The lower the micron, the better it is. The chart below shows the vacuum in inches.

Additionally, you should consider decay. Let’s talk a little about that.

How Should I Lower the Microns?

Well, you’ve found out by now that 600 microns are not good enough for a vacuum. You might wonder if there’s a way to lower it. Worry not! There is.

It is fairly simple as well. All you have to do is keep your vacuum pump for a longer period.

However, there are a few factors that you have to take into consideration. The capacity of the system is one of the main factors.

Considering all that, I can help you pick out the best pump, depending on the situation.

You must know your system’s capacity to calculate the right vacuum pump. How many tons is it?

Let’s assume you have the typical residential system. That means about 16-25tons. Here’s the nifty trick. Just square root will be the right CFM rating for your vacuum pump.

So, in the case of 16-25 tons, you’d need a 4-5 CFM rating Vacuum pump. A higher-capacity pump will get the job done faster, albeit at a higher cost.

However, the exception would be a commercial system. You would always need a vacuum pump slightly more powerful than its residential counterpart.

For example, A commercial HVAC system of 16-25 tons needs a 6-7 CFM rating vacuum pump. Moving on to choosing the vacuum pump.

The higher the CFM, the lower the time it takes to get your microns down. That’s all that matters.

If you’re using the pump for a residential HVAC system, a 5 CFM rating pump will suffice. Keeping it on for long enough will bring your microns down to 300.

However, simply bringing down the micron count is not enough. It needs to stay that way.

By that, your system needs to have a decay holding of 500. Or below to be considered a good vacuum. So, avoid micron higher levels such as 1200.

However, the time it takes depends on the system and its contamination levels. For example, it would be vastly different for a 410a system.

How long does it take to get to 500 microns?

Getting to 500 microns does not take too long, only a few minutes. However, moisture takes the most time. Suppose you take a watch and count the time of the vacuum working. It’ll take about 12 minutes to get to 500 microns. But, it will rise again quickly due to decay.

How many microns is considered a deep vacuum?

Simply put, 20 microns or lower is considered a deep vacuum. You can only accomplish that by method of using a 2 stage vacuum pump. This kind of pump is expensive and hard to get.

Can I leave a vacuum running overnight?

You can leave a vacuum running overnight, but there are some conditions to it. The pump oil that has been drained must have little or no moisture in it. Only then can you leave it running overnight. That is because, generally, you would need to change the oil a few times. The oil gets used to get rid of excessive moisture.

Well, I’ll end it here. By now, you should thoroughly know the answer to is 600 microns a good vacuum. The process of lowering the micron level has also been mentioned.