How Many Microns for 410a? Make The Evacuation Easy 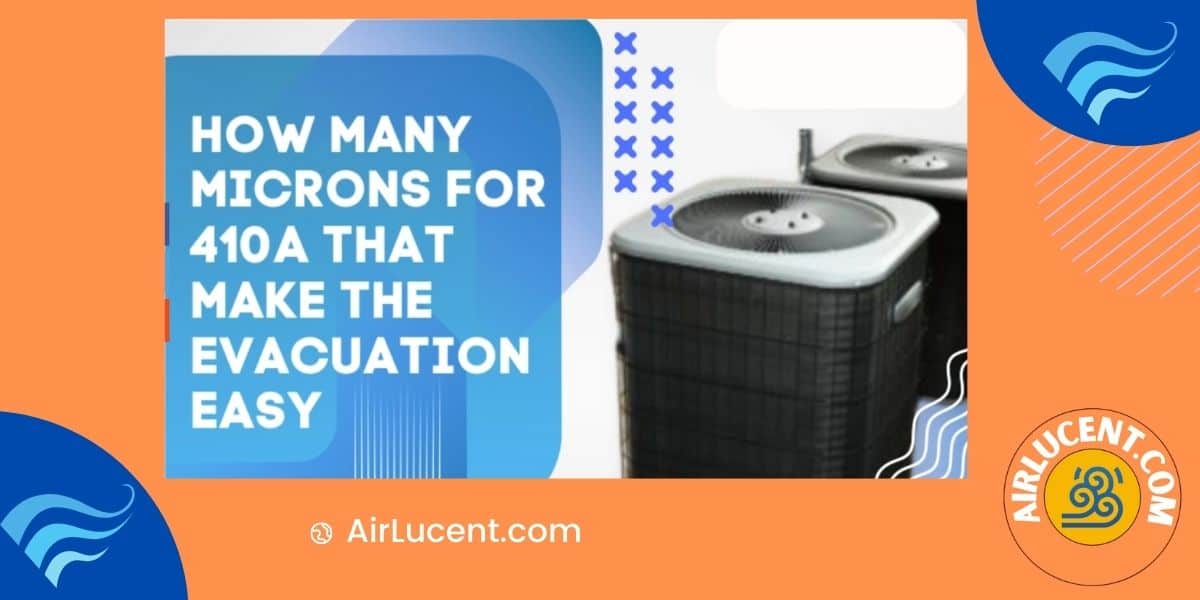 410A is now available almost in the AC system. It is eco-friendly and does not harm the ozone. A proper amount of micron is essential for evacuating the R410A system. But sadly, many of us ignore it.

So, how many microns for 410a should you use?

500 microns is recommended for a new 410a system. However, you will require a 250 micron to remove moisture from POE lubrication oil. Once the switch to 410a is done you need to set the system to get 500 microns reading. The reading should not go more than 1000 microns if there is no leakage.

What Is Micron in A System?

Microns are a parameter to measure the pressure of a vacuum. There is a fixed amount of microns to measure vacuum for different situations. You can try to learn about this from a vacuum micron chart.

How Many Microns for 410a System?

For the R140a system, the amount of micron depends on the oil it is used to run.

R410a is a system that contains POE oil or Poly Ester Oil. To run this system, you must use this oil. Because of this oil, there is a specific amount of microns which is around 500 microns for the evacuation.

The nature of this oil is hygroscopic. It means that it can absorb and hold moisture very quickly. And it’s also very tough to remove that moisture.

This moisture can harm the components of the refrigeration system too. It can also reduce the life expectancy of any operating system. It also increases the dirt in the system.

That’s why you will need evacuation and dehydration to remove the moisture from the system. Evacuation is an essential part that you should do at a fixed interval.

Now, for the evacuation, you should use a vacuum pump. And maintain a proper amount of microns to remove that moisture from the system.

There are many amounts of microns that you can use for the evacuation. It depends on the system you are using. You can also take help from a vacuum micron chart.

The Maximum Microns You Can Use for a 410a System

For an opened service of R410a, you should achieve a vacuum of 250. And it should be with a decay that holds 500 microns. You can also use fewer microns than that. The amount should always be like this because of POE oil.

But sometimes, you can also notice that 500 microns will not be enough for the evacuation process. It can’t remove all the moisture from the system. In that case, you can use higher microns like 600 microns, 750 microns, etc.

Some tiny leaks in vacuum connection points can reduce the process’s speed. And in addition to that, it also adds dirt to the system. But the purpose of the evacuation is to remove dirt and moisture from the system.

To fill up those leaks, you can use Nylog sealant. It will seal all the leaks and help you to maintain proper speed.

You should also decrease the points of connections that are removable. Like, you can avoid gauge manifold during evacuation. All these will help you increase the speed during vacuuming.

You can also check if there is any leak not through the micron gauge of the vacuum. How many microns mean no leaks? If you can achieve 500 microns during the evacuation, there is no leak.

Use of Micron Gauge

A vacuum micron gauge is a vital part of the evacuation process. It is used to measure the pressure level of the pump, showing you the results in microns.

It will help you to know if you have achieved the proper amount of microns or not. That’s why you should always place the micron gauge near the system.

There is a fixed vacuum level at the connection of the pump and at the system. But when you start the evacuation process, you will notice that the pressure level drastically changes.

You can place the micron gauge in two places-

As you can see, the micron gauge is very important. That’s why you should use the best micron gauge.

Here we have recommended some top micron gauges for you.

A decay test will help you know if any dirt or moisture is left in the system. You should perform a decay test.

At first, you should try to achieve 300 microns or less than that amount. When you achieve the target, you should close the CRT valve.

After closing it, the pressure will rise in slow motion, slowly drawing low amperage by blower motor. This motion is addressed as “vacuum decay”.

After about 10 minutes, the pressure level should be 500 microns. This is the target. If you can see that you have failed to achieve the target, it is taking more time. Then it indicates some moisture is left to pull out from the system.

How long will it take to vacuum an ac system?

Normally, it takes about 10 to 45 minutes to vacuum down an ac system. It depends on the system you are using. But if you give about 30 minutes to 45 minutes to the evacuation process, it can pull out all the dirt, and contaminants. Also moisture from the AC system in this time period.

Should you use a vacuum pump to remove the refrigerants?

Should I recycle the recovered refrigerant?

How many microns is a good vacuum?

500 microns are the indicator of a good vacuum. You should always try to achieve 500 microns during the evacuation process. You can also use less than that but that’s an ideal number of microns for that system.

It’s time to say goodbye to you. Comment and share your experience with us about the evacuation process.

Until then, best wishes to you!