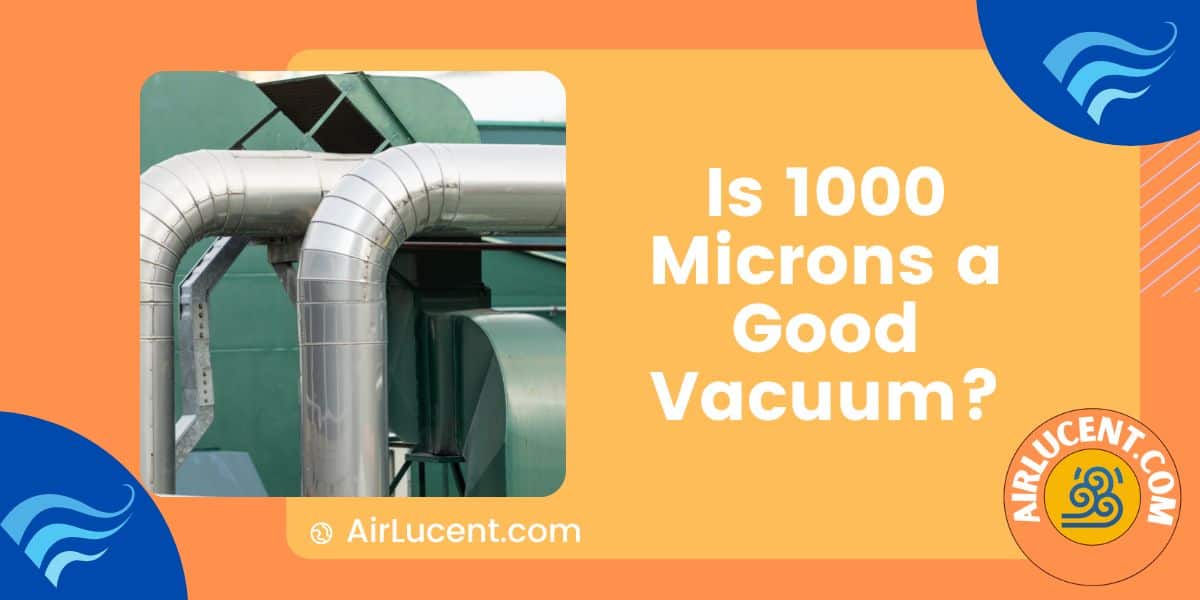 Suppose you’ve hooked up a vacuum and a micron gauge. Then running it for almost an hour. Only to notice that the gauge seems to be stalling out around 1000 microns. And won’t go below that.

No, 1000 microns is not a good vacuum. As it doesn’t guarantee that the harmful water vapor is eliminated from the system. Some even suggest evacuation to 400 microns for better performance. To confirm getting the exact micron levels, you need to conduct some additional processes.

1000 microns does not ensure the complete elimination of harmful water vapor from the system. And from the compressor, as well.

How good any vacuum is usually depends on several factors. A vacuum’s micron levels can indicate if it’s good or not. So which vacuum rate is considered as standard?

500 microns of vacuum rate is a standard for a pretty good vacuum. Experts believe that a good vacuum will have a minimum of 500 microns or below. Nonetheless, it’s even better if it can reach 50 to 100 microns.

Evacuation to below 1000 microns is approved for moisture disposal. And lower than 500 microns after you’ve reinstated the compressor.

Some equipment manufacturers even recommend evacuation to about 400 microns for better performance.

To make sure that you get the exact micron levels, you have to use the right hose.

Testing and Lowering the Micron Level

Now you know that 1000 microns is not good. So you need to test your current status and lower the micron level.

For testing the vacuum pump, connect a micron gauge to your pump. You have to use a ¼” connection for this. Then, you need to verify if that pump can attain a micron level of 100. Or maybe less.

You can choose the Digital Manifold Gauge Set for a good micron gauge. You can find it on amazon.

A high quality vacuum pump can easily attain even below 50 microns.

To lower the likelihood of gas permeation through hoses, you need to make sure that you separate the pump and hose utilizing core tools.

See if that pump fails to achieve 100 microns or below that. If so, just consider altering the oil. You must use high-quality and low vapor pressure oil for pumps, e.g., Appion Tezom.

Changing the oil is to exclude a substantial amount of moisture. Moisture from the wet pump, that is. Consider a replacement if the vacuum pump still can’t reach a deep vacuum.

You may follow the steps below if you wish for lower micron levels.

Let’s start the process with the 1st standing test.

First of all, you need to pull the vacuum. Pull it till it gets to the micron level of 1000.

Using a wider diameter hose, you’ll be able to accomplish this level faster. It should take about 15 minutes.

Then, you need to separate the vacuum using the core tools. You have to do it when your pump is still running. After 5 minutes, you’ll record the leak rate on the vacuum gauge.

Leak rate is the rate resulting from the drop of vacuum in a unit of time.

Notice whether the pressure increases after the 5-minute stabilization period.

If so, then indeed there’s still moisture in that system. Also, It may be that there’s a minor system leak.

Now the next step is the 2nd standing test. Here you’ll open all the core tools. Plus, continue the evacuation process until the vacuum level reaches 500 microns or less.

Then you’ll determine whether there’s any drop in the leak rate. See if the 2nd leak rate is smaller than the 1st one. If so, it means the dehydration job is advancing.

The final step would be the finishing vacuum. After you’ve completed your 2nd standing test, let the vacuum pump run. Let it go on until it’s below 200 microns.

A good pump will achieve 50 to 100 microns without any difficulties. As the pump attains the required microns, try isolating the vacuum rig using your core tools.

Then you have to just allow it to stand for 15 to 25 mins. You’re supposed to notice that the micron level is not rising above 500. This is your clue that the evacuation is finished.

Nonetheless, there might be a drift of micron levels above 500 microns. It happens with the roof air conditioners.

In that case, you need to open the core tools and allow the evacuation to continue.

After the completion of the evacuation, separate the pump. Keep it isolated and also split the suction line open. As you have opened the suction line, let a small refrigerant quantity into the system.

The refrigerant should get the system gradually into positive pressure. It’s best to be careful that the micron gauge doesn’t crack by over-pressurization.

Next, you’ll have to open that liquid service valve. This is for reinstalling the valve core. Plus, to remove the vacuum gauge as well as the core tools.

After that, you’ll expunge the manifold hoses. Then install gauges to finish off the system commissioning.

What should I do after the evacuation?

After the completion of the evacuation, separate the pump. Keep it isolated and also split the suction line open. As you have opened the suction line, let a small refrigerant quantity into the system.

How to get the exact micron levels?

To get the exact micron levels, you have to get the right hose. The conductivity of that hose will determine how adequately the micron levels will get measured. Thus confirm that you use one large diameter hose that also has high conductivity.

Should I change my oil for evacuating?

See if that pump fails to achieve 100 microns or below that in the evacuation for changing oil. If that’s the case, you need to change your oil. You need to use high-quality and low vapor pressure oil, e.g., Appion Tezom.

Hope we’ve cleared your question of is 1000 microns a good vacuum.

Now that you know the answer and everything else, you shouldn’t have further issues. Just go through this guide carefully, and determine the exact micron level. Then you can jump-start the process of the desired evacuation! Buzzing

That is all for today. Have a great day!