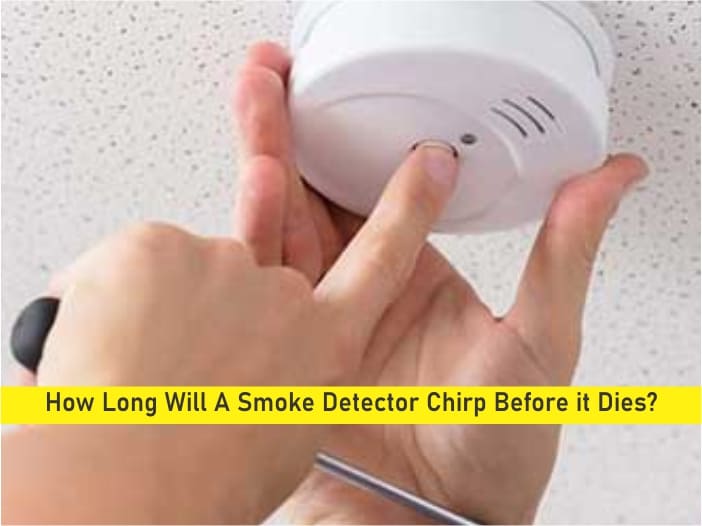 Some smoke detectors are also known to have a “Hush” feature that allows the homeowner to temporarily disable their sensitivity. In such a case, the homeowner dictates how long the smoke detector remains silent. This feature helps in avoiding false alarms, as in the case of smoke resulting from cooking activities.

Notably, if a smoke detector is free from debris and other objects that are likely to block it and interfere with its sensitivity, the alarm is likely to ring as long as there is smoke reaching its sensors.

Please note your smoke detector going silent does not indicate the end of danger. You need to double-check to be sure that there is no likelihood of a fire before resuming normal operations.

Chirping in a smoke detector is caused by various reasons that may vary from one device to another. The most likely situation in which a smoke detector alarm stops chirping is when the battery runs out of charge.

However, if the chirping results from a fault in the operational system, the smoke detector may not stop chirping without your intervention. The implication is that you need to have a good understanding of your smoke detector devices to ensure that you do not overlook the likely challenges that they may be encountering.

When the chirping begins, please ensure to check to ascertain the cause. You can contact the manufacturer or even your dealer if you do not understand the cause of the chirping. Never ignore a chirping smoke detector with the hope that it will automatically stop chirping. It is rare to find that a smoke detector chirps then automatically stops and resumes its normal functioning.

There is also the likelihood of the sensors being faulty, hence the chirping. In such a scenario, it is advisable to change to a new smoke detector like the one with a faulty sensor that will not work optimally.

According to the National Fire Protection Association (NFPA), it is advisable to install smoke detectors in every room for enhanced safety. You would not want to compromise your safety or that of your loved ones.

How do you stop the chirping in a smoke detector?

A chirping smoke detector may be annoying, and you may want to stop it. Various approaches may help stop the chirping depending on the type of device in use. The most common approaches include:

If the chirping continues, there is likely to be a challenge with the operational aspects of the device. Therefore, it is advisable to change the whole device and get a new one to maintain the safety features you initially intended for your home.

How do you silence a low battery smoke detector?

A low battery smoke detector will most likely start chirping. The sound is annoying, and you may want to stop the device from chirping. To do so, the first step would be to remove the smoke detector from its mounting then detach the power cable.

The next step to take is to remove the battery. The final step will require you to press and hold down the test button for about 10 to 15 seconds to allow the device to reset. You will hear the alarm going off for a few seconds before it goes silent.

Your smoke detector will stop chirping as the main sources of power are detached, and the system reset. Please make sure to replace the battery or the machine to maintain safety within your home. The absence of an operational smoke detector exposes you to various dangers that may emanate from fire outbreaks. It is better to be forewarned than be found flat-footed.

Reasons for chirping and why it may take long to stop

Another key point to note is the battery capacity to handle the smoke detector for this long. Some batteries have a relatively short life and may not allow the detector to chirp for that long. On the other hand, other batteries can sustain the smoke detectors for longer periods.

Malfunctioning may also cause chirping in a smoke detector. Some of the common malfunctions include the batteries being installed in reverse or the battery pull tabs being plugged on. Some devices are designed to let out a chirp in such cases.

In others, an open battery drawer may also cause chirpping. It is notable that smoke detectors that chirp due to malfunctions may continue chirping until the error is cleared or the battery dies. However, most manufacturers ensure that their smoke detectors can last for the longest time possible as the devices are meant for safety.

Therefore, it is essential to identify the reasons for the chirping before choosing a corrective strategy. In some cases, you may have to replace your smoke detectors to ensure the security of your home against fires.